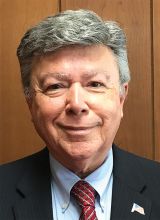 John T. Niccollai has been affiliated with United Food & Commercial Workers Union Local 464A since 1977. He was elected President in 1982 and has continued to serve in this capacity. During his term as President, the Local 464A has seen remarkable growth and has delivered outstanding contracts, which place it among the premier local unions within the United States.

John's industry experience commenced at age eleven when he went to work in a butcher shop. At age fourteen he began employment with Food Fair, which continued through his high school years. While attending Law School he worked part-time as an apprentice butcher. Prior to coming with the union, John was engaged in a number of businesses including a slaughterhouse, a packinghouse, and a food processing plant.

Soon after earning his undergraduate degree from the University of Pennsylvania, he entered the Navy where he served on active duty in a ground/carrier-based hunter/killer anti-submarine squadron. His mission was to fly off the U.S. east coast in search of Soviet submarines. At the conclusion of his active duty in 1962, he entered law school but continued service in the Naval Reserve until his Honorable Discharge in 1969.

Following graduation from law school, he served as a Deputy Attorney General for the State of New Jersey and the First Assistant Prosecutor for Passaic County.

Now, as President of UFCW Local 464A, he is responsible for overall operations, including contract negotiations and the review of investments and finances. He chairs the Executive Board and General Membership Meetings and serves as Chairman of the Joint Board of Trustees that directs the Medical, Pension, Education, and General Funds. On a daily basis, the reviews grievances, contract disputes, and organizing activities. His duties also include meeting with investment advisors and service providers.

Niccollai holds a degree from the University of Pennsylvania Wharton School of Business and Finance. He earned a Bachelor of Laws and Doctorate of Jurisprudence degree from Seton Hall School of Law. He is also a graduate of the National College of District Attorneys.

He has received special recognition as an outstanding labor leader from the United States House of Representatives and the New Jersey State Senate and General Assembly. In addition, he has received the coveted Samuel L. Gompers Distinguished Labor Leader Award. He has been presented with the Studer Award for Outstanding Service to the Community from Montclair State University, the Distinguished Service to Safety Award from the National Safety Council, and the International Humanitarian Award from Boys Town of Italy. Niccollai has been honored by the United States Congress as a Great American.